I did my first self supported bicycle camping tour in 1973 and since then have cycled thousands of miles across the US and Canada and have yet to use a trailer or panniers to carry my gear. Its not that I hate trailers or panniers or that I am a weight weenie it’s simply that I just have never felt the need to carry that much stuff on a bicycle trip. The first time I biked across the US by myself was 1975 and carried all my gear in a handlebar bag and a stuff sack strapped to my Brooks saddle. It was primitive but worked just fine and in hindsight was a pretty light setup.

In 1987 my wife and I biked from the Washington coast to Albany NY via Canada with a similar set up each. We did share one sleeping bag and didn’t need or use sleeping pads. That minimal amount of gear made breaking camp quick and easy. While climbing “Going to the Sun Highway” I was amazed at how easy it was for us older folks on 12 speed road bikes to pass the young cyclists on moutain bikes laden with front and rear panniers. Due to our minimal gear set up we were often mistaken for weekend tourists and not the self supported cross country cyclists that we were.

In 2011 we backpacked 1800 miles of the Appalachian Trail between Georgia and Maine and finally added Thermarest Neo Air pads and individual sleeping bags but compared to the size of my 1970’s tent/sleeping bag set up my 2011 set up still compressed into a small stuff sack with room for additional gear like a wool top and bottom. 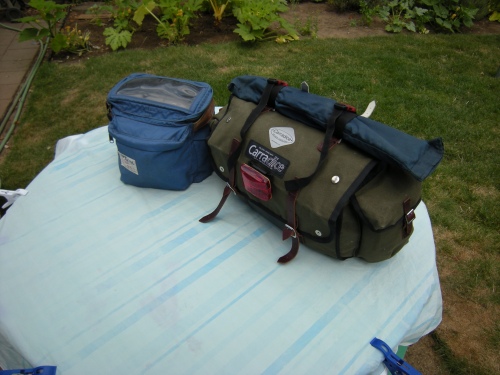 But no matter how many rides or hikes I do the gear list I start with always gets modified along the way.