For the last few days as the rock cliffs have grown more brilliant in color and dramatic in shape I’ve felt more and more like I’m cycling through an old western movie. If you stood here, closed your eyes and imagined the westerns you grew up watching as a kid, “The Lone Ranger”, “Gun Smoke”, “High Chaparral”… then opened your eyes, you’d swear they were filmed here – and you’d be right. All those TV shows were filmed here in the mountains and canyons around Kanab Utah along with seventy other films including Planet of the Apes.

Kanab Utah, aka “Little Hollywood”, is a small, dusty town of about 3,000 people 100 miles west of Lake Powell and the Colorado River and 70 miles north of the North Rim of the Grand Canyon. Similar to Hollywood’s walk-of-fame, Kanab has plaques along its sidewalks commemorating the actors that made movies in the region. Even the “Rat Pack” filmed a movie here, “Sergeants 3”. 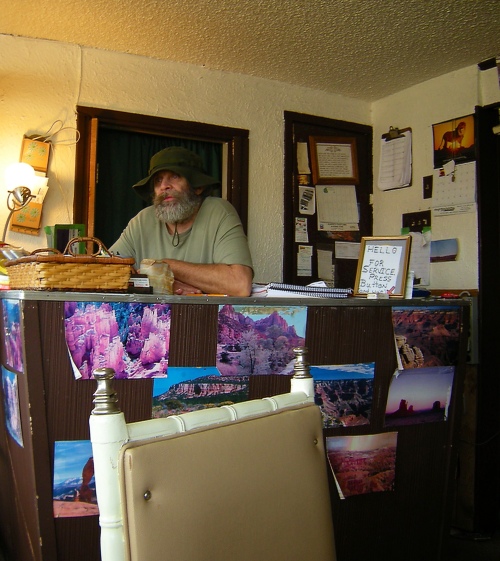 Kanab also has a surprising number of hotels to choose from but the Parry is the one where the movie stars stay. We are not staying at the Parry. We are staying at the Sun and Sand. I don’t think any movie stars stayed at the Sun and Sand (S&S). But the S&S does have a lot of personality thanks to it’s well worn 1950’s structure, interesting foreign visitors and personable manager, Wayne. Like most other guests we spoke to, we would never have stopped at this hotel if we hadn’t read the reviews on Yelp. The paint is peeling, there are cracks in the walls, the faucets leak… plus a few other problems that don’t bother us too much since we are used to sleeping outside but would make a typical hotel guest leave. But per Wayne, “it’s better than it was”. Wayne is a very hospitable fellow even though he looks a bit like a crazed Vietnam vet with his long gray pony tail, wild beard, missing teeth and military green boonies hat. But he’s harmless and I’ve watched him go out of his way more than once to help out strangers and provide customer service above and beyond that of many hotel chains. So I’m glad we took the chance and stayed at the Sun and Sand and visited “Little Hollywood” but winter is coming and we need to head south. “WAGONS HO!”