The road between Kanab Utah and the Arizona border is mind boggling for its beauty and the fact that it is surrounded by millions of acres of public land in the form of national parks, national monuments, BLM lands, etc. We have to come back here with boots, mountain bike, camera and tripod to see the hills and canyons up close and to try to capture some of these incredible colors and rock formations. 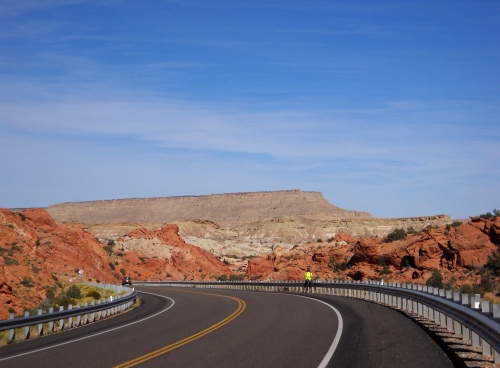 Taking three weeks to bicycle Utah from the top to the bottom has given us an opportunity to see what effect its Mormon roots had on our day to day cycling experience and Utah in general. First and foremost, the majority of Utah residents are not practicing Mormons. We have bicycled by every denomination of church imaginable. Even more surprising Salt Lake City (SLC) elected its first openly gay Democratic mayor way back in 1998. That was ten years before “Progressive” Portland Oregon elected its first openly gay mayor. Who would have guessed? But just like the Catholics had influence on the lunch menu of the Chicago public school system when I was a kid, (Friday=fish sticks = YUK!), fewer merchants are open on Sundays in Utah than in any other state I’ve lived in including VA and SC. The other noticeable influence we saw was the design of the roads and towns. It is said that Bringham Young designed Salt Lake City and the other desert towns with the idea that the region would become a significant place of commerce for the world. As a result of that grand vision even the small towns have main streets that are four lanes wide and are laid out in a predictable grid pattern similar to SLC. As crazy as those commerce predictions were at the time and despite Utah’s conflicts with the US government over the years the state has done something right and Salt Lake City has become a player in world commerce. On a world and national level Utah’s unemployment rate is incredible at less than 6%, 2% below our national average. SLC also gained world attention when it became host to the 2002 Winter Olympics and it was one of the few Olympic cities to experience financial success in the process.

No I don’t work for the state of Utah but I have been very impressed by this state and its industrious people and enjoyed cycling through it more than any other state on this trip so far. Mark Twain said, “Travel is fatal to prejudice, biogotry, and narrow-mindedness and many of our people need it sorely on these accounts.” That still seems to be true today. I think travel also destroys myths and stereotypes. I look forward to returning to Utah soon to explore and enjoy more of this incredibly beautiful, rugged and diverse state.