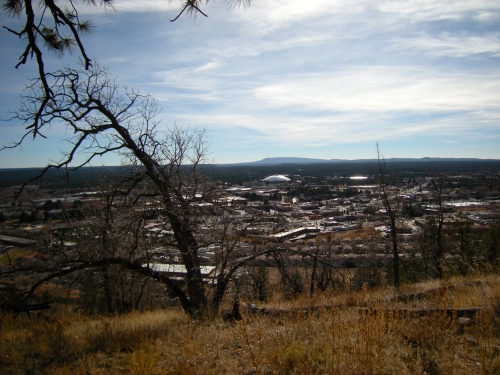 It’s another sunny Sunday in Flagstaff and I’m excited. Delhi Palace has a Champagne Brunch for only $8.95 and I’m going.

We are always greeted warmly at the Delhi Palace by the owner and his staff. One waiter in particularly is easy to talk to and has traveled an interesting route to Flagstaff. He was born in the flat area of Nepal. I didn’t known Nepal had a flat area either. His parents sent him to an English speaking school growing up and he is greatful. Between then and now he’s studied business finance, traveled the world, met his Mexican wife, and spent years living in Mexico City. She had a Ph. D. in languages with an emphasis on Spanish. One day she came home wearing a habit and told him she wanted to become a nun. He waited and hoped for a couple years in Mexico City but when the other guy is God the chance of getting your girl back is slim. Finally he returned to Nepal and like most guys in that situation drank too much for a spell. Ultimately he regrouped and landed in Santa Barbara California. In time his money ran low and through a friend of a friend he found his current position in Flagstaff.

He is an asset to the restaurant with his welcoming smile and personable disposition. In addition to those assets he speaks Nepali, Hindi, English and Spanish well, can read Sanskrit, and can “get by” with his Pakistani. It’s fun to watch this Nepali fellow in his thirties chat and joke with the Mexican diners in their native tongue.

Despite being able to laugh and joke about his past he reports he still loves his wife but is getting along “ok”. Sue and I will leave Flag with fond memories of the Sunday Champagne Brunch at the Delhi Palace and I am sure we will wonder how things are going for our multi-lingual waiter. 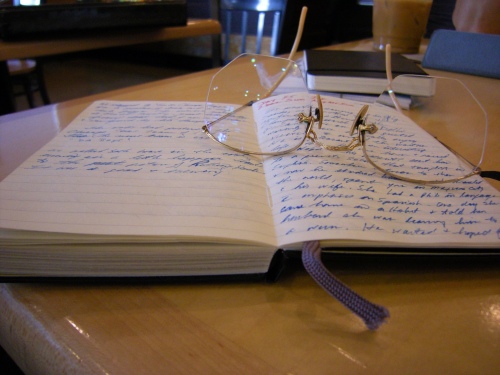 After the last bowl of kheer we walked a bit to let the brunch settle and the alcohol dehydrogenase do its magic. I stopped by the Boot Barn to check out the cowboy hats, went into Hastings to buy a moleskin journal, then walked to Bookman’s Cafe for a four shot Americano. Fortunately shortly after I sat down with the hope of writing something witty and interesting in my new journal Chuck Cheeseman arrived with his six string and smooth voice. His words were wittier and more interesting. 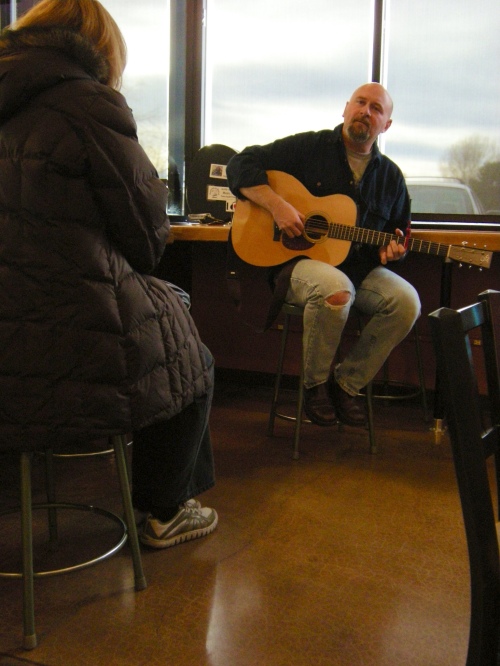 Chuck Cheeseman, no that’s not a stage name

I loved his music selection, heavy with Chicago based folk song writers and his finger picking of ‘Darcey Farrow’. Between sets I introduced myself. Turns out Chuck grew up in Chicagoland also and taught at Chicago’s Old Town School of Folk Music. He nearly settled in Portland Oregon but his wife, an OB/GYN, preferred her Flagstaff job offer so they settled here and are very happy with their choice.

Sunday is coming to a close

…The last set is over, I now own three Chuck Cheeseman CDs, the Champagne’s effects have faded and the espresso shots are kicking in. The sun just fell below the horizon so the green pines now look like giant, black silhouettes against the sky and two large whippets, one sporting antlers, just walked by my table. I’m going to miss Sundays in Flagstaff. 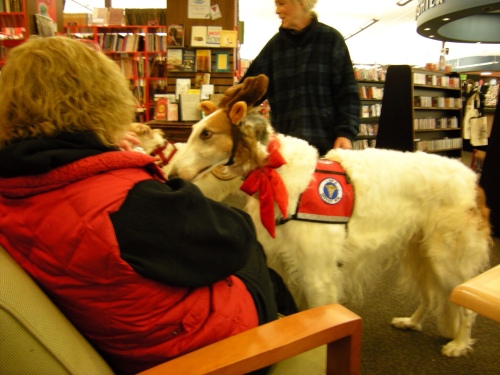 A whippet with antlers