As the brain over heats it tends to malfunction. Time and place becomes muddled, bizarre thoughts and dreams drift in and out and if untreated seizures and death can occur. As I laid there soaked with sweat, as dopey headed as a sailor on a diet of rum and grog, my throat feeling like it had been torched and the fragile scabs torn loose with each uncontrollable cough, it took me a while to come up with a plan. The plan wasn't much – stay in bed. By chance it was my first private room of the trip and even came with a porthole but being exhausted, alone, in a new city, in a new country, knowing I`d feel worse before I'd feel better, I couldn't get too excited about the accommodations. 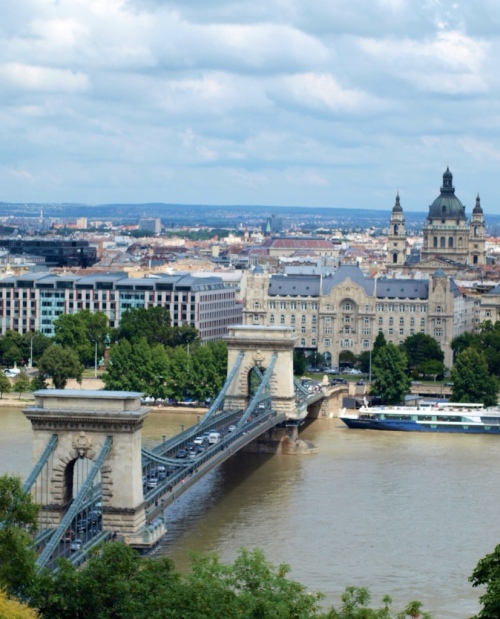 The Chain Bridge with St. Istevan's Basilica in the distance

My first three days in Budapest I spent alone, sweating in a berth positioned just above waterline, forcing fluids and choking down Tylenol. Time and again I seem to find myself in situations where no one is going to help me but me and this seemed to be another one. 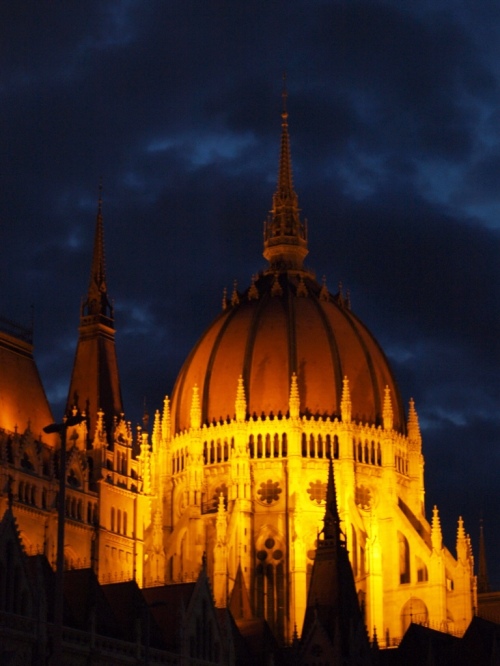 By my fourth day my energy started to improve but I couldn't speak, I had laryngitis. To save energy I bought a ticket for one of those Hop On/Hop Off buses and toured the Castle Area, Citadel, Heroes Park, etc. On my sixth day in Budapest I had to head out to find a new place to sleep as the boat was full. I made a final attempt to visit the Szechenyi Baths but a downpour hit when I was half way there. Cold and wet I quickly lost the the energy or desire to keep walking. Instead I ducked into an Italian restaurant for some hot pasta and a glass of wine.

Today is a beautiful sunny day in Budapest and I feel better than I have in a while but the rest of Budapest will have to wait until my next visit. Today I leave on a train for Zagreb Croatia. A new day, new city, new country and new start – that sounds good to me.

… Departing Budapest was not going to be as straight forward as I was led to believe. The Metro 2 (M2) was not in service and a bus was running in its place. The problem was that despite my best efforts I couldn't determine the bus schedule specifics. A bus pulled up sporting a sign that read M2, so I squeezed myself in. I was the very last soul to get on and the door hit me in the back as it closed. It took a while and many blocks passed by before I pulled myself up to the bus driver. When I asked him if this bus stopped at the Deli train station he nonchalantly said, “No”. I thought the response may have been due to my weakened voice or a language barrier so I pulled out my map, put my finger on the train station and asked again. He responded by taking one of his thick Hungarian fingers and pointing it at a bus stop on the opposite side of the road. I was traveling the wrong direction. As we passed through another intersection he took a pen from his pocket and kindly wrote, M2E. The bus finally stopped and I headed back to the place he pointed to.

As soon as I boarded the M2E I showed a young Hungarian fellow my map with my finger on the train station. He seemed reluctant to answer but finally confirmed that this bus would get me there. It was a long ride back through town, over the Danube and up the Buda hills. I lost sight of the young Hungarian that made the promise but the route seemed to correspond with the map. As I began to wonder if I would recognize my stop when it came, a voice whispered, “This is your stop.” The young Hungarian fellow was behind me and his words and kindness made my day. It's important to be able to take care of yourself but it's so nice when someone steps up and gives you a little help. Croatia here I come.