It is said one of the differences between a tourist and a traveler is time. A tourist on a bus tour or cruise has the handicap of visiting an area for only a few hours. Also they are often deposited in retail zones where the emphasis is exchanging dollars not ideas with the locals. 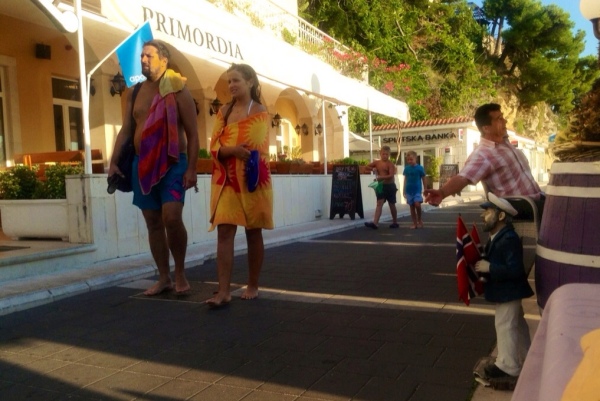 Mario being his dynamic self on his home turf

Mario is one of those locals. He is a dynamic, likable personality that everyone seems to know, even an American who’s just passing through. We noticed each other a number of times on the promenade but never spoke until one morning when I passed him at an outdoor cafe’ as he was having his morning coffee. He said, “Good morning”, and asked me if I was visiting family in Podgora. Why else would an American spend weeks in a small Croatian beach town on the Adriatic? My answer was, “No, just wanted to see what Croatia was like”. He invited me to take a seat and join him for coffee; I was excited to hear the ambassador of Podgara’s story.

Mario has a full head of thick black hair and the energy of a person at least a decade younger so whether he is in his sixties or fifties I can’t say but he left a farm in the mountains and arrived in Podgora forty years ago. “Back then you could not get a job if you went to church” he said, then from under his shirt he pulled a simple gold cross that dangled on a thin chain along side a small gold Croatian flag. His smile was rich with pride. “They (the communist officials) would take pictures of you as you left church. You would go for job, they would look in their files and see your picture leaving church then say, no job”. Then he joked, “Back then they didn’t want us to go to church so we all went. Now we have freedom and no one goes to church.” Mario, like most Croatians is Catholic and finally had to go to Germany to find work.

At that moment the waitress, also a bridesmaids in his daughter’s wedding, came over to ask him to break a 100 kuna note. Despite owning two restaurants in Podgora, Mario takes his morning coffee at a competitors shop. He reached into his pocket, pulled out a thick lump of kuna notes and completed the transaction without difficulty or reluctance. 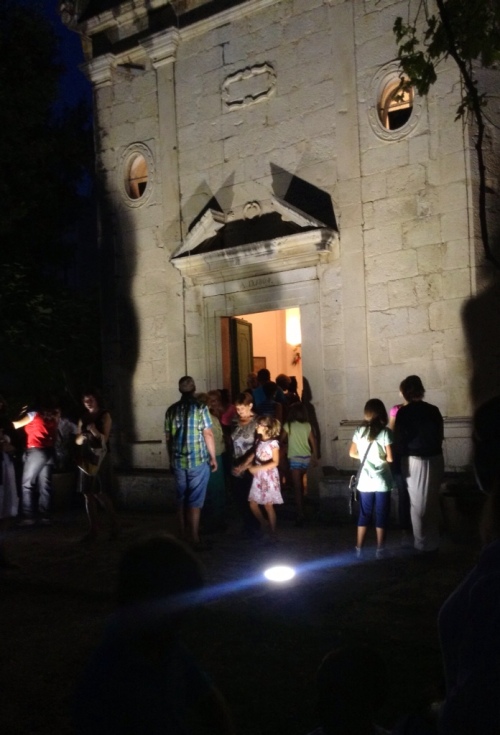 The Catholic Church in Podgora Croatia

He continued to speak, “Americans work too much, focus too much on money…they don’t live life”. I agree with Mario on all those points. During our visit Mario bought coffee for two other people. One, a female employee of his who was just passing by and joined us for a few minutes and the other was a street cleaner who was cleaning the sidewalk with a vacuum strapped to his back. Mario leaned close to me and whispered, “He does real good job of cleaning the walk near my restaurant”. When the man sat down at a table across the way to catch his breath Mario called to the bridesmaid, “Get my friend a coffee”, then waved to the street cleaner and wished him good morning.

Mario works in Podgora from April through October then spends two months in Germany, two months in Paris, “then I go someplace else in the world with my wife”. I said to him, “You sound like a rich man Mario”. He said, “No, no rich but I have enough.” 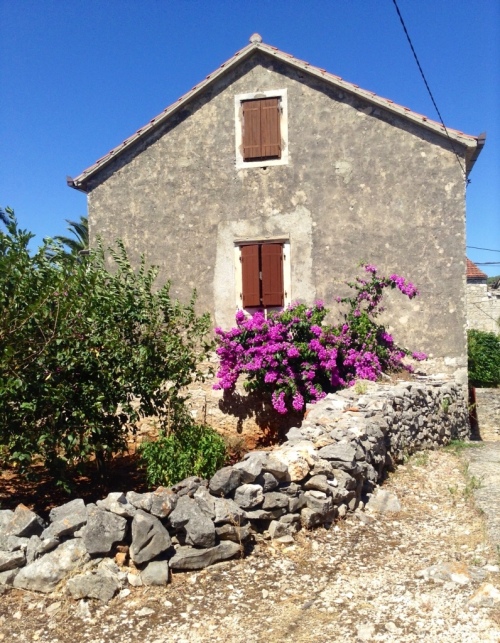 Vrboska on the the island of Hvar, Croatia

Enough is a concept that eludes many Americans, knowing when they have enough money, work, toys, clothes, etc. We tend to fixate on “more” and bury ourselves in the debt and stress associated with acquiring it but never make the effort to figure out what would simply be “enough”. Determining how much is “enough” is a difficult exercise but also liberating and necessary if you ever want to get to a point where you are living life on your terms. About a decade ago I determined nine hundred square feet of living space and an old car was “enough” for me and combined with other thoughtful choices I created a more balanced life for myself at the expense of being an oddball amongst my colleagues. Now, especially when applying sun screen, I wonder how my colleagues are doing with their big houses, new cars and sixty hour work weeks. I am sure some are happy with their lives and choices but I know many others are not. 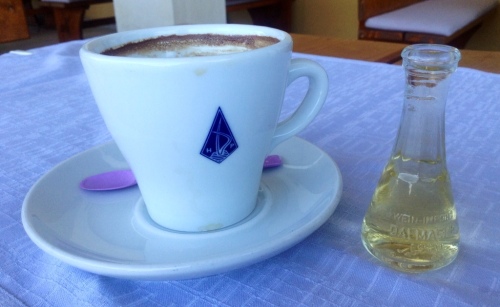 At Mario’s you get something extra with your coffee, a shot of brandy. All for less than $2 US

Mario doesn’t have the financial wealth some Americans I’ve known have but nonetheless he might be the richest guy I know because he is “living” life in the present, shares what he has with others and has the contentment of knowing he has “enough”, which after all is a state of mind, not a number on a spreadsheet.

Tourist or traveler I’m glad I spent enough time in Podgora to have coffee with Mario.