Despite taking some time to get our bearings in Paris due to the unusual street names and large round-abouts we eventually saw what we came to see and ate more cream filled pastries then we should have but, “C’est la vie”. I even enjoyed my visit to the Louvre and a peek at the Mona Lisa but the truth is I enjoyed the ceilings, interiors and architecture more then the paintings. For those who didn’t know,(like me), the Louvre is a huge, beautifully restored palace who’s beauty rivals that of the art pieces it houses. Of the art there I found the sculptures to be the most interesting. The sculptors ability to create a beautiful, life-like work from cold, hard stone, amazed me and they sculpted those master pieces hundreds of years ago.

I first started thinking about visiting Paris when Eddie Merckx was consistently winning the Tour de France. It was the seventies and a Belgium exchange student and I used to talk about European bicycle racing and the Belgium superstar during our rides along the back roads of Indiana. Seeing the Champs Élysées, Arc de Triomphe and all the other sights in person that I have previously only seen on videos of the Tour de France was great. Now I can better appreciate what the riders mean when they say, “The Champs Élysées looks flat on TV but it’s not”. It’s also a rough, cobble stone surface that must inflict some pain on the riders worn bodies when sprinting at top speeds at the conclusion of three weeks of racing.

We may have lost our way a few times between Notre Dame, the Eiffel Tower and our hotel but we are definately on the right train to “The Camino”. Three seats back a pair of hiking poles look oddly out of place as their tips rise high above the heads of the seated passengers and a few cars up I saw a man boarding with a backpack that had a shell dangling from it, the symbol of “The Way” or “The Camino”. “The Way” is a walking path that has been traveled by thousands of people, known as pilgrims, for hundreds and hundreds of years. The route we are doing is known as the “French Way” which stretches from St. Jean Pied de Port France to Santiago de Compostela Spain, 800 kilometers (500 miles).

The transfer of trains in Bayonne went well but five kilometers from our destination in St. Jean our luck changed. The train came to a complete stop without a station in sight. Then the the engineer walked out of his private space, off the train and down the tracks. We sat there for at least an hour and a half while the passengers and the train staff jabbered back and forth in French. A French woman kindly translated for us without us even asking. A tree had fallen onto the tracks and we were going back to the last train station where a bus would take us to our destination. A fellow pilgrim from France offered us her phone to let us notify our albergue that we were going to be late. 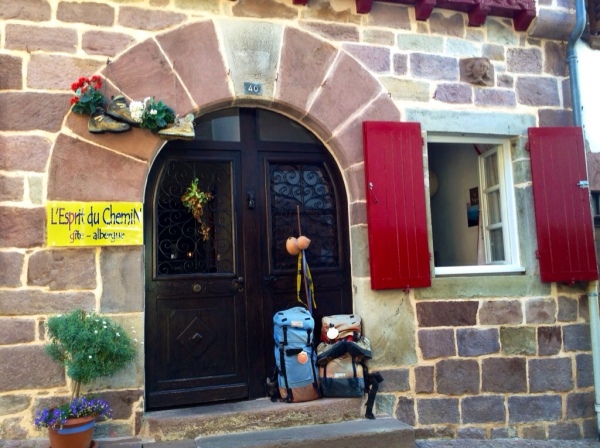 We arrived in St. Jean and the albergue two and a half hours after the dinner was served but they kindly fed us like kings despite our late arrival. The staff typically end their day after eleven and wake around five in the morning, they feed the pilgrims at six-thirty then spend the rest of the day cooking, cleaning and answering phone calls. It’s a hard job but the owner, Huberta, and her three volunteers do it well and with an incredibly positive attitude. The albergue is named “L’Esprit Du Chemin” and they truly have the spirit of “The Way”. I can’t imagine a better place to start our journey along “The Way”.