This mornings sunrise from the middle of the Atlantic was a brief but brilliant display of colors and clouds. Before I could even ready my camera the salmon pink sky and clouds changed to orange then yellow and suddenly the performance was over. I was left staring squint eyed at a glowing sun in a powder blue sky with waves stretching to the horizon in all directions. No land, no distant boats, just blue waves and the white froth created by the ship’s bow plowing through them. The warm, dry air was tactile proof we were now far from cold, wet England and the time had come to start strolling the decks in shorts and flip-flops. 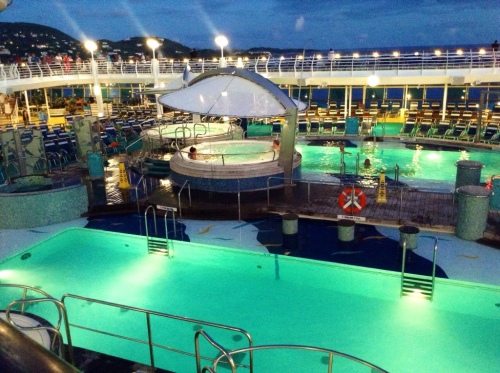 Stripped down to my “racing trunks” and a sheepish smile I headed toward the pool. Why so many men my age wear such minimal swim wear is a mystery and most often a mistake. My excuse is they are easy to pack and dry quickly. The salt water pool was hardly a racing venue as it was only a couple of strokes long but I did a few laps for the experience. The largest hot tub was my true destination. I expected to meet a few of the English lads I saw there yesterday but instead the pool was occupied by only one interesting Welshman.

He was a laid back fellow that I finally realized was the performer that did the Elton John tribute show the night before. His vocals were flawless and his piano playing was phenomenal and very physical. At one point he was playing one handed while sitting under the piano. He has played guitar, bass, drums and piano as well as sang lead and wrote songs for his own bands as well as the Alan Parson’s Project, Electric Light Orchestra or “ELO”, Cold Play and others. However when he started his family he decided to give up touring and focus on studio work. The Elton John tribute started as a small, side project that “just took off”. The cruise ship gigs are especially fun because he can bring the family along.

But even this gifted musician and part time “Rocket Man” is just like any other dad in the eyes of his children. When I asked him if his kids were musically inclined he said he thought so as they could easily sing in key from an early age but then he laughed. “I finally had to hire a proper music teacher to give them piano lessons. They just wouldn’t take me seriously as their piano teacher.” Then he joked, “When my son becomes a teenager and realizes guitar players get all the girls maybe he’ll ask me to teach him guitar.” 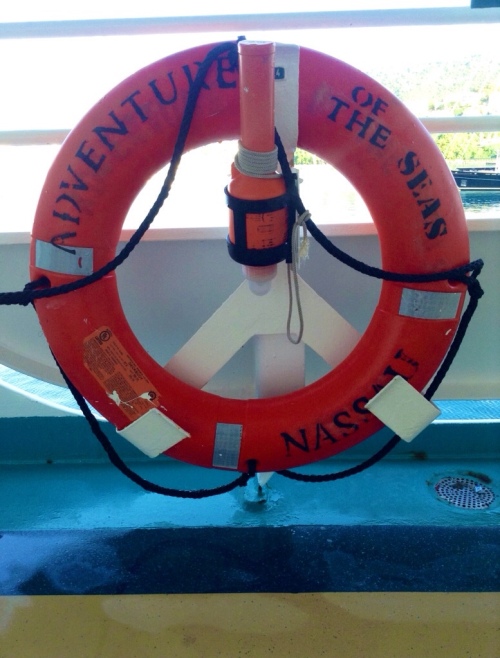 Today’s dip in the hot tub was surprisingly interesting and tomorrow I’ll attend my first ever, “Writers Group” . I feel a little nervous as public speaking has always been a necessary evil rather than a joy for me but being pushed out of my comfort zone occasionally is a good thing. I’ll let you know how it goes in my next post.