After spending a little over two weeks in Puerto Rico (PR) including nine days of exploring by rental car I still feel I don’t have a solid grasp of the people and culture. On the surface it looks like America with the same hotels, restaurants, chain stores, etc. but the driving style is different, more free form yet gentler. Apparently it’s not cool to use turn signals in PR and stop signs are merely suggestions. However, on their narrow, crowded streets they move patiently taking turns merging without blowing horns or shaking fists. Exploring PR by rental car seems to be the best way to see the island and driving became easier over time but never easy. 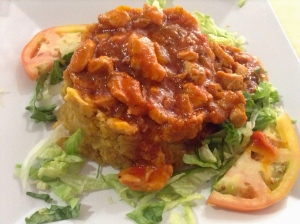 One PR experience that was delightful from the start was eating mofongo. It was a rainy night and Sue and I were starving. We asked about a place to eat close to the hostel. Directions from the staff were: go straight so you’re facing the bar across the street then turn left, go to the corner, take a left at that bar, go past the betting parlor, past the white food trunk, (it never moves), at the second corner on the left you’ll see a bar, it has really good Puerto Rican food.

It was Sunday night but looked to be business as usual in this part of San Juan. The one landmark they forgot to mention were the hookers. Despite the steady rain doors were wide open and loud music and slurred speech along with other common bar sounds spilled out onto the wet streets. Once again the umbrella I bought for a sudden down pour in Budapest came in handy. I never planned on carrying it this far.

Surf on the western side of PR near Ricon

Mofongo is a traditional Puerto Rican dish with African origins consisting of a mound of fried green plantain mashed with some garlic and cracklings and draped with a creole or garlic sauce of chicken, beef or shrimp. The creole sauce is a mild salsa and the mofongo texture is like a thick mix of mashed rice and turnips. I tried it in each region we visited and was pleased with each experience.

A Volky. PR nickname for the VW bug

We traveled the island in a counter clock wise fashion starting and ending in San Juan. Our first lay over was at a converted convent on the  west side of the island, an area known for great surf. We wandered down narrow roads looking for quaint small towns but usually we only discovered potholes slightly smaller than the KIA we were driving. On the south shore we discovered Ponce where centuries ago the Spanish planted the seed of colonial architecture and Moroccans coffee beans. It had a beautiful plaza surrounded by many Spanish colonial buildings in fairly good repair anchored by a beautiful Catholic Church. We were given a personal two and a half hour tour of the Ponce museum that never became boring. None of the cities we visited looked  economically robust but Ponce, the second largest city in PR, was the most esthetically pleasing and authentic in feel. It didn’t seem to exist only for tourist and cruise ships unlike some of the other Caribbean towns we visited.

There seems to be two very different worlds in PR where the poverty rate is 45%, nearly twice that of Mississippi. One is the resort areas laced with high-end golf courses where people are sequestered for a week and go home with the vision of Puerto Rico being an island paradise. Then there is the other world were locals live in very basic housing or even on the street, getting by on meager wages. Thanks to Golf  Resort over development and Booking.Com we got a look at both worlds. 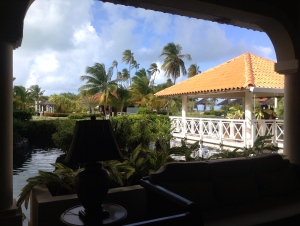 In the north-eastern region near the Yunque National Rain Forest we snagged an incredible deal on a decadent hotel with multiple pools, a beach, four restaurants, spa, etc. You could even call a porter if you didn’t feel like walking to the pool and he would drive you there in a golf cart. We didn’t use that service. While there we spent two hours listening to their timeshare pitch in return for a $100 certificate to use at one of their restaurants. It was very interesting to see the math and sales techniques they employed, especially the sense of urgency they attempted to create. “I can only offer you this price if you buy today.” We declined the offer but had a lovely meal. 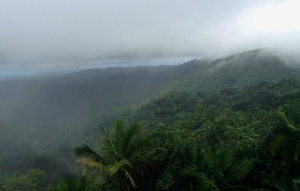 The most enjoyable and universal feature of Puerto Rico for me was the kind, easy-going personality of the locals I met. They had a laid back island-like personality mixed with a caring, family centered focus that I associate with the Mexicans I have met or worked with. It was a pleasure to visit with them and they were so proud of their homeland. I don’t feel I need to return to Puerto Rico to see more of the rain forest, its tourist sites or golf resorts but I would enjoy  spending more time getting to know the Puerto Rican people and their culture. 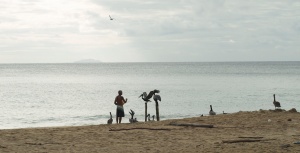 Man trains wild Pelicans to dance, fly to other posts and come to their name