Memorial day is an excellent time to close our eyes, ignore the political chatter and give thanks to the Americans in uniform who will do the difficult jobs that the rest of us won’t or can’t do. It’s these young, strong and brave men and woman that will sacrifice dearly to fulfill the wishes and needs of our country. Some will die in the process, others will do their duty in a safe stateside environment but all will make sacrifices and share a comradeship that only those who have served can understand. They will do their duty to the best of their ability no matter who is elected or whether they agree with the policies or not. They took an oath and will honor it. They cannot choose their assignments and will not quit. They are honorable, dependable, under paid, over worked, sometimes misused and sadly mistreated but yet they stand tall, ready to defend our country to their death.

GITMO or disaster training aboard the USS Yellowstone – Cuba

Studies have shown that the majority of people who volunteer for military service are from homes of simple means and few options. They joined the military to better their lives. Many also think it’s the best way they can fulfill their patriotic duty. By contrast several of the traditional college students I’ve met were in school only because it was in keeping with their parents plan. A few even joked, “Well, it’s better than joining the Army”. Some had the attitude that those who volunteered for military service were “not smart enough to go to college”, unlike themselves or joined because they “wanted to play Rambo”. Both statements vividly illustrated their arrogance and ignorance.

The soldiers and sailors I served with as an enlisted man and later as a medical officer were not less intelligent than my college classmates they just had different parents and economic means. As for wanting to “play Rambo” they actually had more in common with Mr. Rogers. They just wanted to do their best for their country, community and loved ones. In fact many did not want their children to have to make the sacrifices they had. They hoped that their children could “just go to college”. 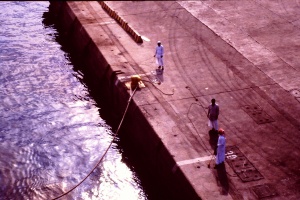 But because of what they had learned and seen while serving their country they realized that America needs young, strong, brave and intelligent volunteers to make sacrifices to fulfill the wishes and needs of our country. Someone with exceptional physical and mental abilities needs to volunteer to rescue Americans here and abroad from natural disasters, hostile forces or even Somalian pirates. People willing to learn complex skills and sacrifice time with their family are needed to patrol the waters and skies of the world to make sure aggressors don’t take advantage of their weaker neighbors, our allies. I do not think the world is as evil a place as the media portrays but there is and always has been bullies and thugs looking for easy prey.

Thanks to our strong and well-trained military we have been able to fend off the bullies and thugs as well as respond to world crises and disasters for over 200 years. To all military personnel, past and present, and their families I thank you for your service and salute you for your sacrifice.