WELCOME TO CANADA and ALGONQUIN PARK 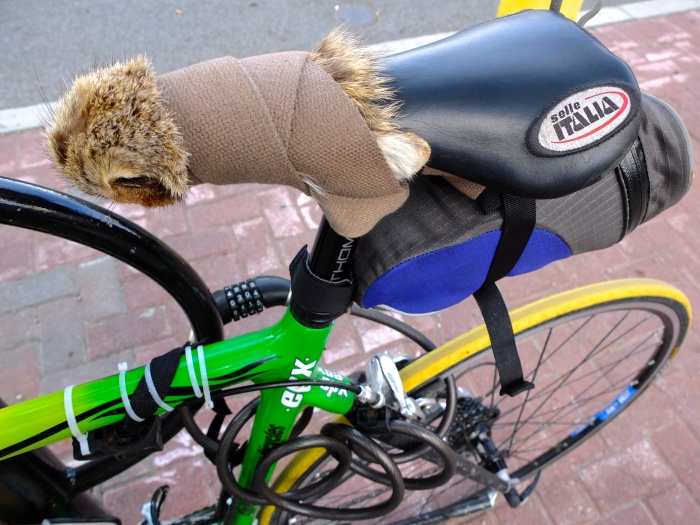 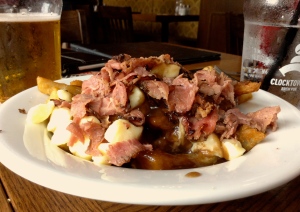 “Are you in a hurry? No. Then why did you go through that stop sign? What? You went through the stop sign back there.” In disbelief I turned to look into the eyes of my strongly built accuser but all I saw was an expressionless face draped in dark black sunglasses.

“I did not go through your stop sign my overbuilt friend. In fact if you were more attentive you would have noticed I turned my engine off while I waited for you to finish hassling the poor fellow in front of me.”

That’s what I thought but not actually what I said to the agent guarding his Canadian homeland. Fortunately I was awake enough to realize he was just doing his job; pushing my buttons to see how I would respond. “What?” was actually all I said or needed to say, especially since I had already paid for my hotel in Ottawa and I really wanted him to let me into his country.

The clear waters of Pog Lake

He then asked, in one incredibly long-winded sentence, if I was carrying any guns, explosives, pepper spray and countless other products and weapons that could cause harm to the citizens of Canada. It was obvious that the only reasonable answer was no so that’s what I said. If he had gone the extra mile, searched the vehicle and found the pepper spray, I was ready to blame Sue. “Oh, I had no idea sir. My wife must have packed that.”

Ottawa Ontario is the capital of Canada and we were there July first, Canada Day. That is Canada’s Independence Day so everyone was clad in red, white and maple leaves. People filled Parliament Hill, rain came and went a few times but by sunset Mother Nature joined in the festivities, turned off the showers and allowed a tremendous fireworks show to take place.

A paddlewheel boat, it would drag the logs booms across lakes and down rivers

West of Ottawa is Algonquin Provincial Park, 3,000 square miles of forest, streams and lakes. The two days we were there it was mostly wet and gray but we still did a little hiking along Pog Lake and the historic logging camp trail. The park is home to moose, bear and wolves and has the feel of the deep woods of Maine or Alaska.

Similar to Alaska the men of Ontario have a need to hang blue tarps over everything they own, i.e. boats, tents, old cars, even family members. Across from us the fellow erected a large family tent single handedly and then began erecting a tent around his picnic table. A few minutes later I looked up and noticed he had ropes dangling from six trees, some were as high as ten feet off the ground. To the ropes he attached a number of blue tarps and after two hours of throwing, hoisting and tying, his campsite looked like a carport with a blue canvas roof.

Naturally you would expect such a wet area to be thick with mosquitos and it is, especially in June and July. To deal with the mosquito and black flies many of our neighbors wore hooded bug suits with a black bug screen sewn across the area where the face normally pokes out. When I first glanced over at the neighbor lady I thought she was Muslim. All I could see where her face should have been was black mesh. Then her son ran up and I couldn’t make out his face either. Finally I figured out they were both wearing the hooded bug suits. The bugs were pretty intense and if I owned a bug hoodie I would have put it on too. 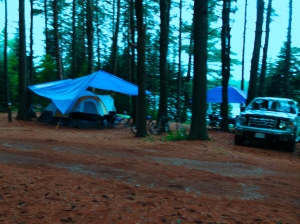 One of many blue tarps hanging from the trees of Ontario

A more pleasant aspect of our Pog Lake campsite was that it was on the, “No radios, No pets” loop. So at night while we snuggled in our sleeping bags all we could hear was the flute like song of the thrush, the eerie call of loons and the endless flapping of our neighbors blue tarps.