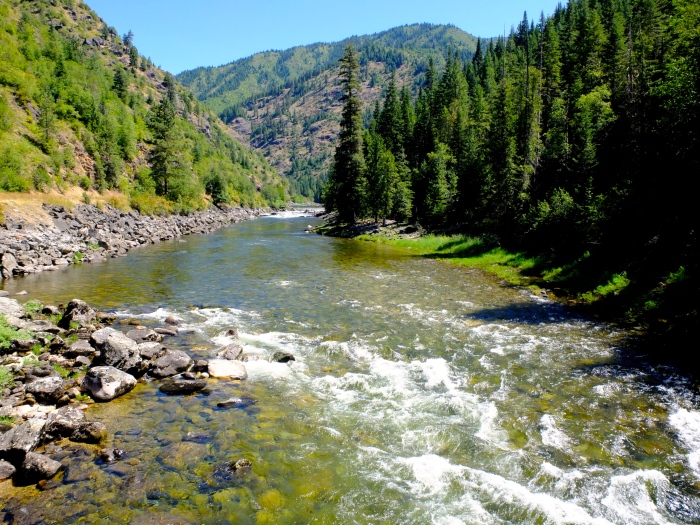 It’s twilight and my bare arms are starting to get a little chilly. Outside my tent I can hear the fast moving Lochsa River a few yards beyond the trees. It has been forty years since I have slept in this forest but I remember it so vividly it could have been last week. I arrived here then via my dependable Schwinn, unrolled my sleeping bag on my bright orange tube tent, placed my food in the river to keep it cool and finally laid down under the summer moon with a feeling of disbelief. “Am I really sleeping next to a beautiful river surrounded by thick woods over a hundred miles from the nearest services?” Back then a steel framed Schwinn Paramount and a tube tent were cutting edge ultra light touring gear and there was nothing between here and the Bitter Root Valley except a long climb up Lolo Pass.

This patch of woods next to the river is not the easiest campsite to get to in Idaho but it has been an important one over the years for Indians, explorers and lowly cyclists. In fact this is the same spot Lewis and Clark camped in September 1805. It’s changed a little over the years but fortunately you can still sleep here in a tent surrounded by the smell of hemlocks and the sound of a cascading river. Some places in our country should be left unaltered, they are what they should be today, tomorrow and forever; this is one of those places. I am grateful to all the people who have worked so hard to keep this place as it is and should be.

About a hundred and twenty miles east of here is Missoula Montana, home of Adventure Cycling Association, a non-profit organization that works hard to promote bicycle touring in the US and abroad. They have mapped over forty-two thousands miles of bicycle routes throughout the US and Canada. The idea of leading thousands of cyclists across America on bicycles was an idea Greg Siple had in 1972 during his epic bicycle ride from Alaska to the tip of Argentina; entitled Hemistour. The 1973 National Geographic issue describing Hemistour was given to me by a high school buddy but unlike my yearbooks, football jersey, etc. it is one of the few things I have kept from my high school days.

Yesterday I shook Greg Siple’s hand. It’s rare we get to shake the hand of a hero from our youth. Perhaps as expected of the heroes from our youth I thought Greg would be taller but what he lacked in height he more than made up for in friendliness. We talked about Hemistour, Adventure Cycling’s early years when it was still called Bikecentennial and common cycling legends of our shared past like Ian Hibell and coach Bob Davenport of the Wandering Wheels. In the process I shared with him an incident I had while biking across the US in 1975 and it’s relationship to the early development of Adventure Cycling. He said I should write it up and send it in. I sheepishly told him I did a few weeks earlier. (It’s the first thing I have ever submitted for publication.) We concluded our conversation, he wished me well and we parted ways.

The bicycle that Ian Hibell used to cross the Sahara

A few minutes later Greg returned with the managing editor, Alex Strickland. Despite being old enough to be his father meeting the editor that I submitted my first article to made me feel like a med student again facing my first patient. To my surprise he had just read my piece the day before and said it was one of the best things he had read in the last couple of months. The fact that he had read it and liked it put me in the clouds. Now whether my writing ever sees the light of day on the pages of Adventure Cycling, it’s blog, etc. time will tell but it was an inspiring experience that this old, new writer will remember for a long time.