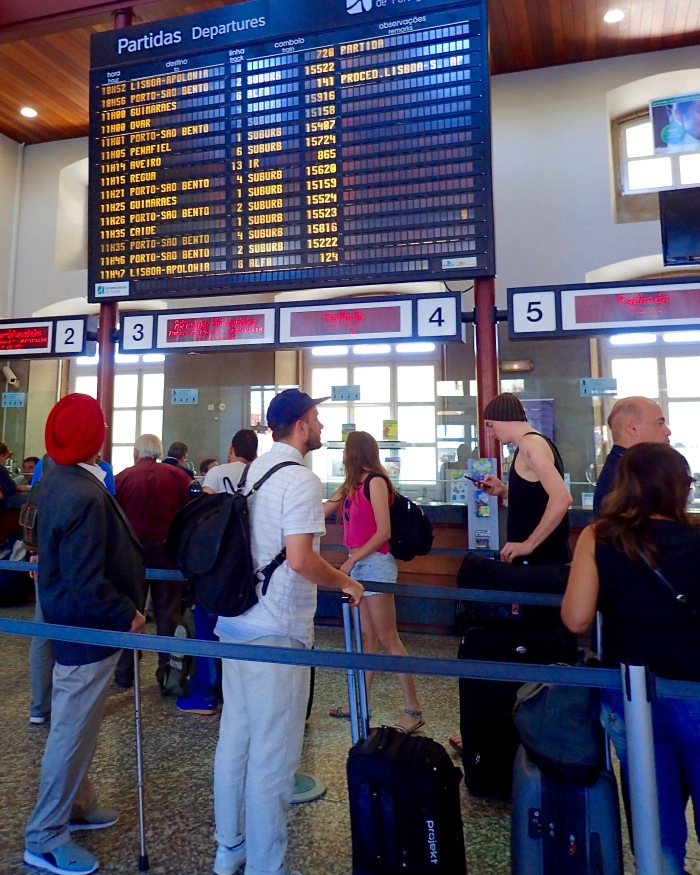 Campanha Train Station, Porto, Portugal. The starting point for our travels to Lisbon.

The train had been stopped too long to just be picking up passengers plus we were not at a station. We were sitting on a sunny stretch of track with a view of nowhere when the diesel engines fell silent and the overhead fans struggling to keep us cool became the dominant white noise. Tensions were rising as heads turned this way and that like confused dogs that couldn’t figure out where you threw their ball. Finally a conductor entered the car and a few passengers shouted questions in Portuguese as he sped by. His answers were brief and he was not stopping to explain. The Portuguese passengers gasped slightly with hearing his answer then began calling the loved ones and colleagues who were waiting for them at the end of the line in Lisbon. Since my command of Portuguese was limited to the numbers one through five I was clueless.

The mystery was revealed when I overheard a passenger tell his British colleague, “I’m not going to make the meeting.  Our train just hit someone on the tracks and we have to wait here until the authorities finish investigating.”

That’s how our travels through Portugal began but amazingly our train was delayed by just twenty minutes. Hopefully the person on the tracks fared as well — he may have, I repeatedly searched for information on the incident but found nothing. Perhaps the conductor said we hit something, not someone, and that detail was lost in translation. I hope so.

Portugal is sometimes referred to as the small, poor country on the western edge of Europe. It is small, smaller than the state of Illinois in both size and population and getting smaller. Despite being eighty percent Catholic, Portugal’s population of ten million has been shrinking by a half a percent a year for the last two years. The Portuguese I spoke with during my month in the country all gave the same reasons for the negative population growth. “There are no jobs here…We must leave our country to work…The politicians only help themselves, not the people.”

Despite those complaints the Portuguese consistently expressed great pride in their small country and hometowns. One young man spoke in detail about his country’s beautiful beaches, pleasant countryside, great seafood, mild year round climate and more, then concluded with “Portugal is perfect.” Others demonstrated their love for their homeland by waiting tables or pouring beers instead of using their college degrees to obtain more prestigious, better paying jobs in other countries.

And how was I able to speak to so many Portuguese if I could only count to five in their language? To my surprise an amazing number of Portuguese speak English. It was much easier to find someone who spoke English in Portugal than in Spain. As a Portuguese hotel clerk explained, “We are a small country and we must work with the big countries. We are too small to be arrogant. We speak English because we cannot afford to translate movies and TV shows from English into our language. We listen to them in English and read the Portuguese on the bottom. That’s how we learn English, from TV, not school.”

We stepped off the train in Lisbon at Apolonia station in the Alfama district. It’s the oldest district in the city and home to the Lisbon Cathedral, the starting point of the Camino Portuguese. The Alfama is also one of the few areas of Lisbon not destroyed on the morning of November 1, 1755. That morning Lisbon sustained a powerful earthquake that crumbled buildings and left cracks in the earth fifteen feet wide. Less than an hour later the city was hit by a tsunami consisting of three massive waves traveling so quickly that people on horseback could not out run it. The few buildings left standing after the earthquake and tsunami fell victim to the fires that followed. Estimates vary but approximately forty-thousand people or twenty percent of the city’s population perished.

Walking through the Alfama area of Lisbon, Portugal

The Alfama has always been home to the hard scrabble element of society and some of the apartments are so small they don’t have a shower or bathtub. Fisherman and sailors have lived in the Alfama forever and their rugged, sometimes tragic lives spawned a local genre called Fado music. Fado is a form of Portuguese folk music sung by women dressed in black who wail about the loss of their men to other seaports or the unforgiving sea. That evening we attended a Fado performance in a little restaurant wedged between stone buildings and slim cobblestone streets. The Fado singer was a buxom woman hermetically sealed in black lace and silk, like a deli sandwich in cling wrap, and delivered her songs in a booming, gritty voice. Despite being receptive to most types of music I did not warm to Fado. As the mournful verses grew in number and the singer’s guttural voice crescendoed, instead of being mesmerized I felt like hiding or running or jumping aboard an outbound ship. By the end of the performance I could understand why some Portuguese men went to sea and chose not to return. Of course it takes no talent to be a critic, but that’s how my Fado experience left me feeling.

Another Fado option along the cobblestone streets of the Alfama district, Lisbon, Portugal