Hong Kong Is The Beginning 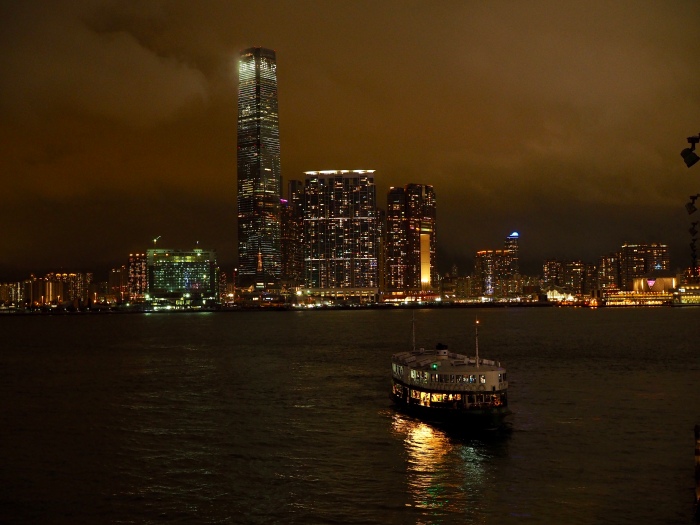 Looking across from Hong Kong toward Kowloon.

I’m on the road again so I decided to bring my blog back to life but I didn’t expect my arrival in Hong Kong to be so emotional. I concluded my fifteen hour flight by watching James Cameron’s Titanic. For those unfamiliar with the story the ship sinks in the icy waters off Nova Scotia or maybe it was Newfoundland. Anyway just as Rose’s forever love sinks below the deadly waves our flight attendants flipped on the lights in preparation for landing. In the bright cabin lights tears spilled over my lashes and down my cheeks. I suffered a few stares from other travelers as I wiped my tears away but what can a romantic do? I cry every time I watch that movie.

Passing through immigration and customs was much less emotional. I simply filled out an entry form with my name, country of origin, place I was staying, showed them my American passport and they let me into their country. After a little repacking at the airport I bought an Octopus card. It is basically a debit card you use as a metro pass. You may use it to purchase museum passes as well and for purchases at a number of stores including the ubiquitous 7-11’s. At 7-11 you can recharge the card in 50 Hong Kong Dollars (HKD) increments. I also bought a ticket on the Express Train which takes you directly into Hong Kong in less than thirty minutes. It’s a subway from the airport to downtown which saves you from the notorious Hong Kong traffic.

Using the Octopus card I boarded a bus for my hostel in Aberdeen, about a half hour from downtown Hong Kong. Aberdeen was known by the natives as Hong Kong Village, the original Hong Kong. Not knowing any better the westerners named the whole island Hong Kong. Later when they realized their mistake they decided instead of rectifying it they’d simply change the name of Hong Kong Village to Aberdeen since  it reminded them of Aberdeen, Scotland. 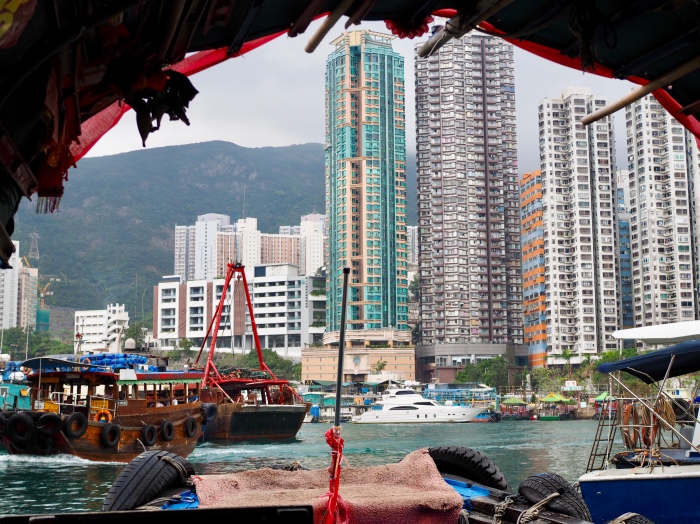 Aberdeen Harbor looking out from a Sampan

Traveling alone I usually prefer staying at hostels because I like the vibe of hostels over hotels and it’s easier to meet people at hostels. My roommates for my Hong Kong visit were an Irish woman about forty and a woman in her twenty’s from Kazakhstan. Most hostelers I’ve met are of the twenty-something vintage or a little less than half my age. I enjoy hearing the excitement and enthusiasm in the younger voices.

With wide eyes and joy in her voice the woman from Kazakhstan said, “All my life I dreamed of seeing Hong Kong and now I am here!”

Most seniors just don’t speak as enthusiastically or joyfully as young travelers. Often in our sixties and seventies we are more enthusiastic about blood work and biopsies than we are about travel. I’m not putting my age group down or minimizing the importance of medical issues, I get excited about my lab work too. But it’s good for my soul to stop at a hostel everyone once in a while and be infected by youthful enthusiasm for travel and new experiences. 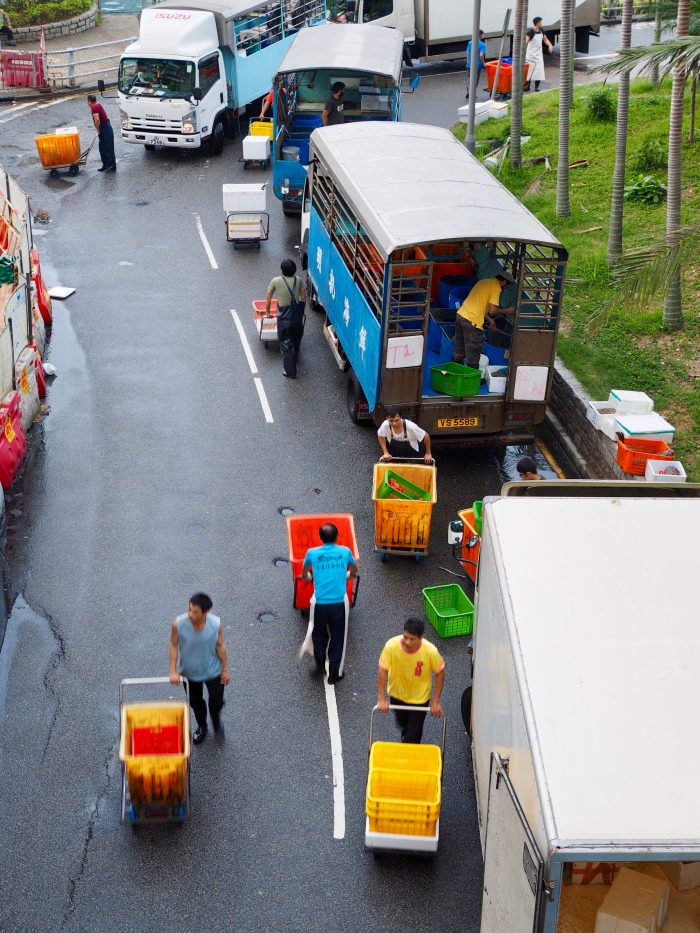 Aberdeen is best known for its fish market and before dawn the narrow walks and roadways are packed with men in rubber boots pushing trolleys with fish so fresh they are jumping from the water filled yellow crates they are transported in. Dozens of fish mongers filled the roads leading to the piers waiting for eels, clams, stonefish, redfish, whitefish, ugly fish and fish so menacing their razor sharp dorsal fins look like a strip of 6 penny nail.

Most of my time in Hong Kong I spent walking the miles of covered walkways and escalators that stitch the skyscrapers together. One of their claims-to-fame is a 1/2 mile long moving walkway which is said to be the longest in the world. And it seems that in most of those skyscrapers are countless malls catering to the richest of the rich with expensive jewelry and custom clothing. One mall had a three story Apple store with a spiral staircase and a view of the city and harbor.

Serving a humbler niche was the mall in the World Building. It catered to new immigrants who were looking for labor jobs and cheap cellphone packages. In tiny stalls wedged between travel agents hawking tickets for home were immigrants frying, simmering and selling the foods they were raised on. For many those foods originated in the Philippines.

The highlight of my Hong Kong visit was not the malls or the food. It was a Saturday night walk along the ferry piers of Victoria Harbor. At the piers an array of buskers sang karaoke style or with one or two musicians for back up. They sang traditional songs in Chinese and pop songs in English. Their was even a guy dressed in drag doing a professional grade cabaret performance. A few of the performers were so loud and packed so close together that they drown one another out. But others found a private corner with good acoustics and sang with poise and conviction. Their were singers with beautiful voices who sang as fine as I have heard on the radio or television. Others were blessed with good intentions. But the singers combined with the light show from the skyscrapers made the night a festival and was a good introduction to Asia.

Street performer near the ferry docks. (This might take some time to load.)