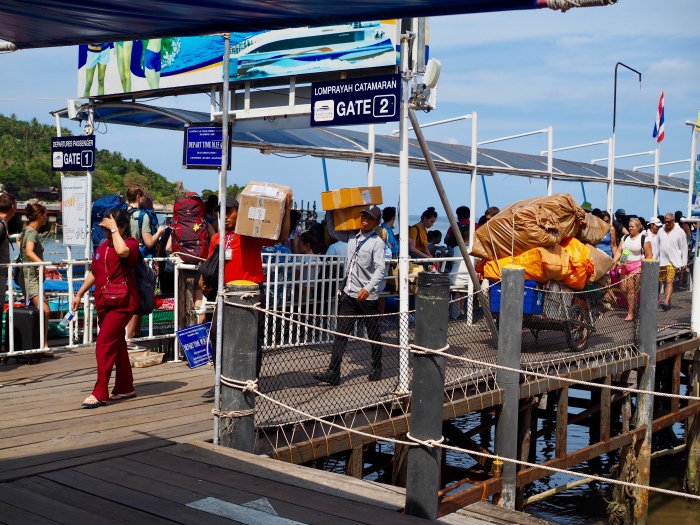 The “gooood boat”unloading cargo before taking on backpackers.

I wasn’t planning to hitchhike into Bangkok, in fact I had a bus ticket in my pocket. In Koh Tao when I was debating with myself whether to buy the combined boat/bus ticket from the smiling brown skinned agent in flip-flops she emphasized, “It gooood boat”.

I figured she was just nudging me to close the deal. It was common knowledge her competitors’ boat was faster and anyway I prefer riding trains to buses. But I also wanted to try something different on the return trip. In hindsight she may have been comparing the boat to the bus, which was not good. I bought the ticket.

She said we’d arrive in Bangkok around 6 PM which would be perfect. My new acquaintance and I were planning on catching a beer and dinner before parting ways. He needed to find a cheap hostel near where the bus would drop us. That was the other side of the city from where I had already booked a room.

We met on the pier waiting for the good boat. I squeezed into line at the last minute and after seeing the huge crowd ahead of me I mumbled something like, ‘I guess this is the place’.

A fella with twisting blond locks that reached his shoulders, a shaggy ginger beard and the general appearance of someone waiting for the rest of the band to show up said, ‘I guess that depends on what you’re looking for’.

From that point forward we talked and laughed nonstop on the boat and bus. The entertaining longhaired fellow was a Welshman who was bicycling around SE Asia on his dad’s old Peugeot. Iwan was an avid mountain biker but it was his first go at bicycle touring. Wanting a more efficient bicycle than his mountain bike he turned dad’s ten speed into a roadworthy eight speed. He put a single front chainring on and swapped the five cogs in the rear for an eight speed with some low gears for climbing. For comfort he traded the skinny 700c wheels for 650B’s which were fatter and more forgiving to his hands and butt.

Despite what I’ve seen on the streets of Bangkok Iwan assured me that pedaling through Thailand, Cambodia, Vietnam and back again wasn’t that bad. Except for a few rough spots, the highway shoulders were wide and covered with a smooth layer of tarmac. The hardest bit was riding across Cambodia. It was the less developed of the countries and food and water were further apart. The 7 Elevens that seem to be on every corner in Thailand and other Asian countries were far less abundant in Cambodia.

When we did take a break from talking about travel and his work as a dry wall stone mason we noticed the bus was behind schedule. We were still an hour south of Bangkok but three hours past our arrival time and growing hungrier and thirstier. The bus pulled into a gas station for what Iwan hoped was a smoke break but instead the driver announced, “bus broken”. He said we could wait on the air conditioned bus until another one came. When pushed for when that would be he said, “One hour”. But it was not convincing. It sounded more like a reflex than a calculated arrival time.

Iwan turned to me and asked, “Do you want to hitch?”

Iwan giving it a go. By the way that’s a tea not a beer in his right hand.

So we stood in the road at the exit of the gas station with our thumbs held high. We glistened in the glow of the streetlights as we quickly soaked our shirts with sweat in the thick night air. Neither of us knew if a thumb held high meant anything to Thai drivers. During those fifteen minutes we did our best to look respectable and friendly. We tried to establish eye contact with the drivers without gazing too intensely at them. We didn’t want to come across like one of those psychotic killers in a slasher movie.

A few minutes into our attempt the thirty year old Iwan asked, “When was the last time you hitchhiked?”

I heard doubt in his voice. He was starting to wonder if I was really up to the task, which was understandable. He probably assumed the last time I hitched hiked I was in college bound for a Grateful Dead Concert. Which would be about ten years before the Welshman was born.

“Just a few years ago”, I said, “when I was hiking the Appalachian Trail. We often had to hitch into town to resupply.”

“How were you received?”

“We had great luck. I just had my wife stand in front of me with her hat off so everyone could see her white hair. We always got picked up.”

Iwan’s experience wasn’t as pleasant in Wales where a few drivers yelled “Fuck Off” as they sped by and another shouted, “Get a job”. But one of the young lads who told him to “Fuck Off” saw him again later, (after making a pub stop), apologized for his foul comment and gave Iwan a lift after all.

Finally a car pulled over with a mom, dad and two small boys inside. The woman asked what our trouble was.

“Our bus broke down and we just need a lift into Bangkok.”

She and her family lived locally and were not going that way. Nonetheless she stood with us on the side of the road inhaling the exhaust of countless scooters, trucks and cars and when a driver rolled down their window she spoke for us. She must have stood with us at least 15 minutes before quietly wandering away. And so she should have. She and her family were planning a night at the movies

But a few minutes later she returned carrying a sign she wrote for us in Thai. She put a lot of time and effort into helping a pair of unshaven, illiterate foreigners. With the mismatch of ages she may have thought Iwan and I were a father and son who’s Thai holiday was rapidly falling apart and she was going to do what she could to salvage it.

And shortly after she gave us that sign a Thai engineer leaving the gas station pulled up and offered us a ride. He drove us into the heart of Bangkok and dropped us within a block of my hostel. Since I had already paid for a private room with two bunks the Welshman didn’t have to race crosstown to find a cheap place to sleep. Instead we walked leisurely into Chinatown for a late dinner and a toast to our success and the kind people that made it possible. 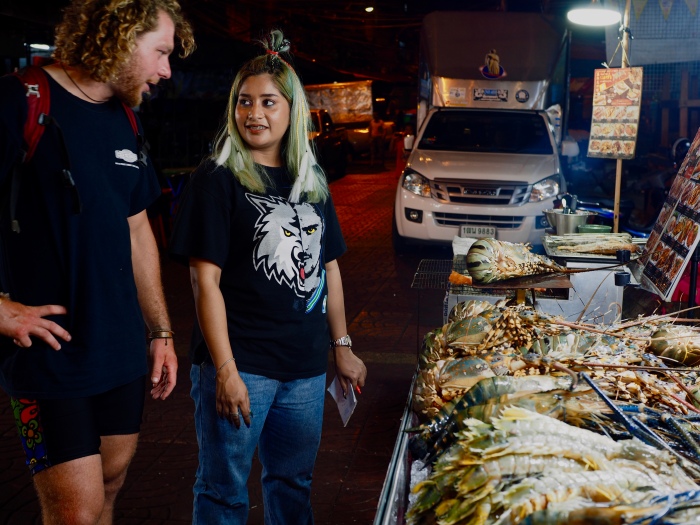 Checking out the giant rainbow lobsters at the Chinese Market. She said they were caught in Vietnamese waters.

It was not a good bus but it was a good experience.