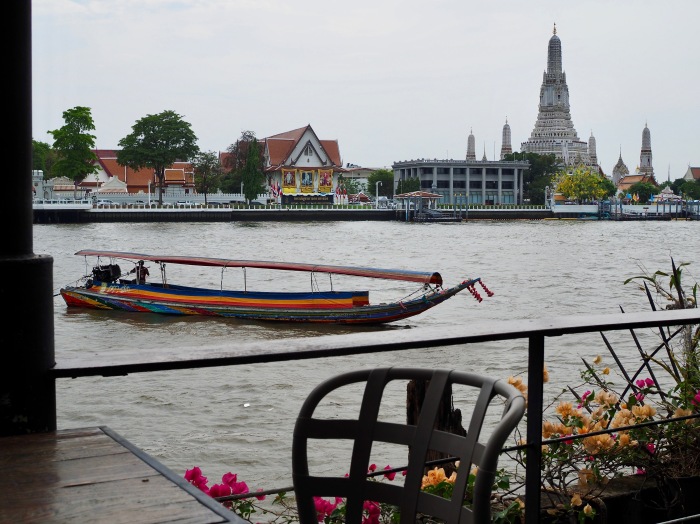 My gear fits into a 20 liter pack and a Timbuktu messenger bag so even with stifling heat the short hike from the pier on the Chao Phraya River to the train station wasn’t that taxing. To escape the sun I cut through the shadowy cave-like structure that housed the Rotfai Market. Like many structures in Thailand it was minimal, four open walls and a roof. Inside butchers hacked away at beef ribs and pork chops while other venders weighed mangoes and bread fruit or hawked belts and wallets. As I strode down the long central aisle pigeons hopped and flapped to stay a step ahead of me and every 10 yards or so a rat darted across like a nervous jay walker racing to escape an oncoming car. I’ve seen squirrel size rats with blackish bodies and slender hairless tails before, but in SE Asia they’re more social. I saw them strolling through public markets at noon, crossing alleyways from one house to the next at twilight and I even saw a couple hanging out by the hostel pool watching a brilliant moon float in and out of the clouds. It was almost romantic. 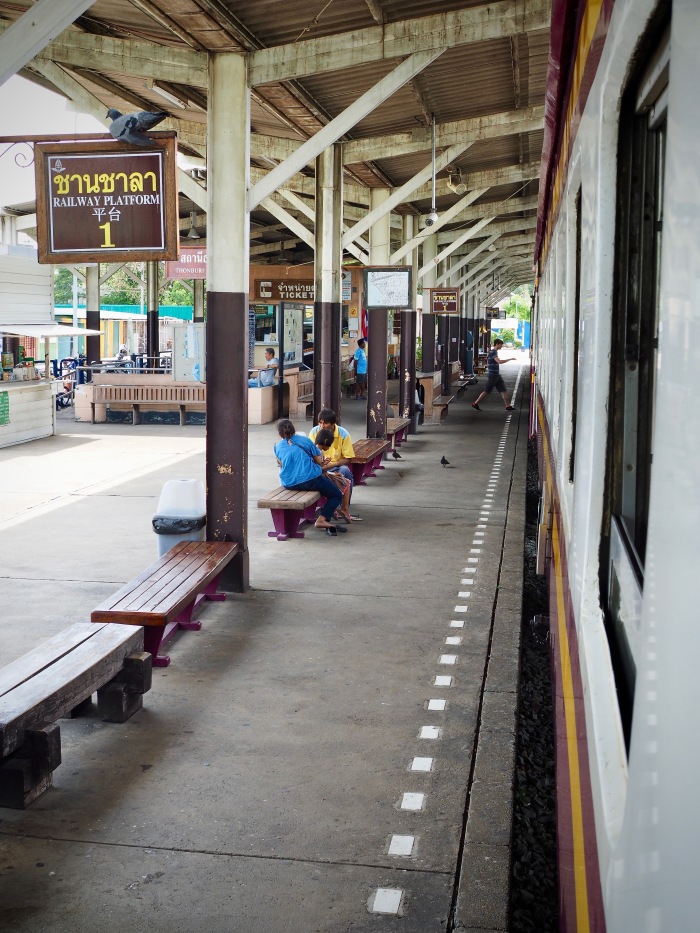 When I stepped back into the sunshine at the far end of the market the train station was just to my right. Foreign train stations can be confusing, especially when you don’t speak the language and the curlicued native letters look-like doodles. Fortunately the Thonburi depot wasn’t like that. Out front was a list of the few trains that still stop at the miniature station along with their departure and arrival times in both Thai and English. And if you didn’t read Thai or English with only two tracks you still had a fifty-fifty chance of hopping the right train. To increase your odds the station is manned by a human not a machine so if needed you can use pantomime or draw pictures. But all you really have to do is pay 100 Baht ($3 US) and sit outside with everyone else and wait. 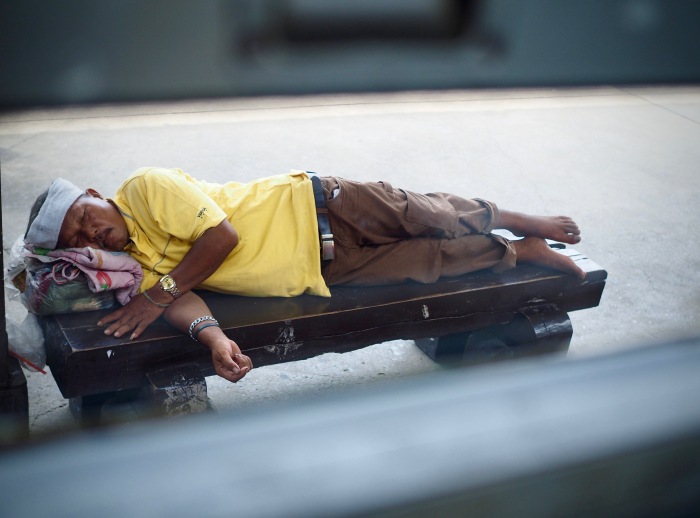 Until 1999 Thonburi was a major train station serving the Southern Line to Malaysia. That line has been rerouted to the Hua Lamphong Station in Bangkok. Today only a few commuters use Thonburi station along with tourists who want to ride the remnants of the Death Railway to Kanchanaburi and walk across the bridge on the River Kwai. The building of the Death Railway is a WWII atrocity worth remembering. 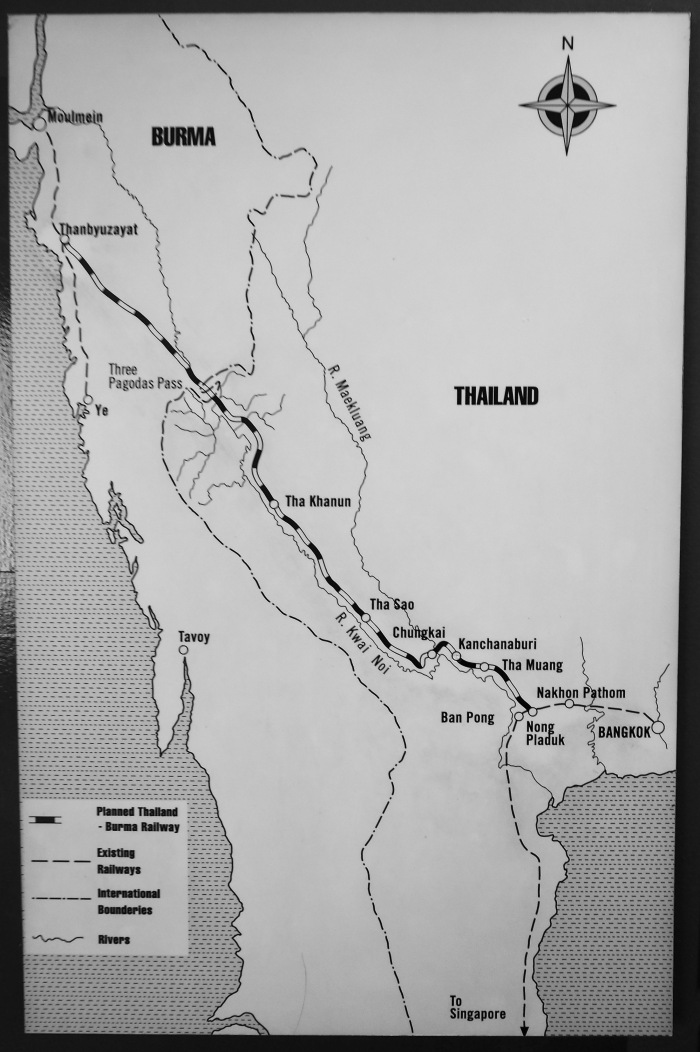 In 1942 Japan decided it needed a rail line to connect Malaysia/Indonesia to Burma, countries they had just taken from the British and Dutch. And the country connecting Malaysia to Burma, Thailand, was in step with Japan having declared war on England and America in January of that year.  The fall of Malaysia and Indonesia resulted in over 85,000 British, Australian, New Zealand, Canadian, Dutch and other allied forces suddenly becoming prisoners of war.

But in June of 1942 Japan suffered a major setback. Four of their aircraft carriers were sunk at the Battle of Midway. Moving supplies to Burma by sea became far more dangerous. Japan needed to build a railway through Thailand quickly if they were to accomplish their next goal, crushing the British in India and claiming that country for their own empire. 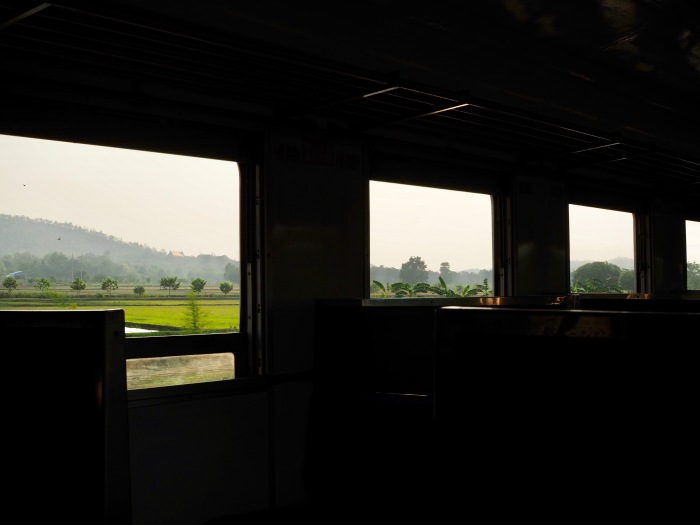 I’m not sure how old the train car was that carried me from the Thonburi Station to Kanchanaburi but the leather seats were deeply cracked and peeling and the steel gray fans bolted to the overhead looked like the ones you see in detective movies from the thirties. The toilet was low tech too. It emptied through a hole in the floor onto the tracks. Only a few of the worn train seats were occupied and those who filled them were so overwhelmed by the heat they could do little more than pant. On the positive side the windows opened wide enough to suck in a little cross breeze. During the two and a half hour trip to Kanchanaburi they also sucked in enough dirt from the fields and barnyards dotted with bony cattle and cackling chickens to blanket all flat surfaces with a fine layer of dust. 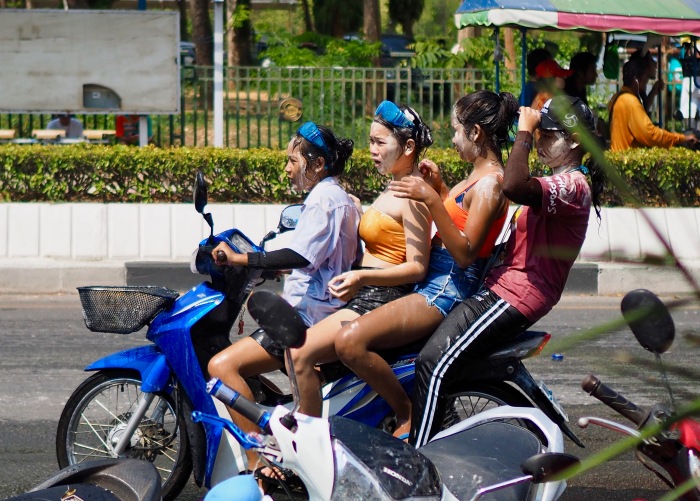 I barely stepped off the train in Kanchanaburi when I was confronted by a swarm of tuk-tuk drivers offering to take me anywhere. My hostel was only a fifteen minute walk away and my phone had a map with a blue dot so I told them I was walking. The drivers collectively laughed. I didn’t get the joke. Then an email from the hostel popped up on my phone warning that Songkran, the national water fight, was still going strong in Kanchanaburi and that I should secure all my belongs in plastic before leaving the train station.

Backpacks are not watertight. To compensate I line mine with a large waterproof stuff sack and place all the smaller sacks and pouches in it. Some hikers prefer using a waterproof pack cover but I find them more fiddly than a stuff sack, and in high winds and driving rain, less trustworthy. So per my hosts’ advice I emptied my pockets and stuffed everything except my iPhone 7 into the waterproof sack. Apple claims the phone is water resistant down to 1 meter for up to an hour. 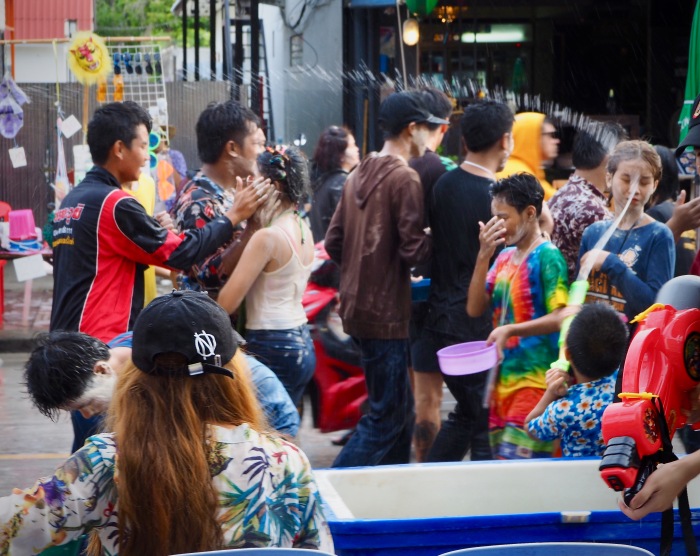 I followed the blue dot for a couple of blocks before realizing Google had chosen the Songkran festival route. I was part of the parade and it was going to take a lot longer than fifteen minutes to reach my hostel. Like everyone else I was drenched with buckets of water, garden hoses and water guns. Some of the parents noted my white hair and respectfully poured water gently over my wrists and hands. Unlike their parents the younger kids offered me no special treatment. They took aim with their massive water guns and soaked me as if I were a classmate. 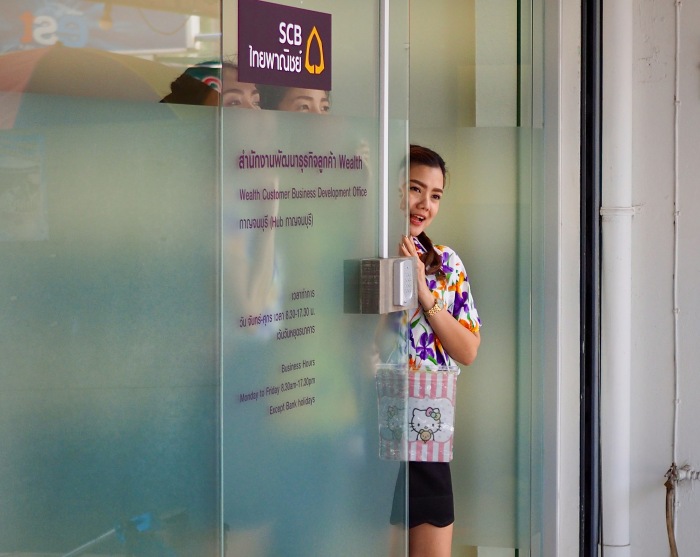 Teenagers recognized I was a ‘farang’ or white faced westerner and greeted me with “Welcome to Songkran Thailand”. Then with a delicate touch they smeared grayish-white clay on my cheeks. And just as many young men as women followed the facial with a hug. Unlike my detached Songkran experience in Bangkok my Kanchanaburi experience was tactile and wet. 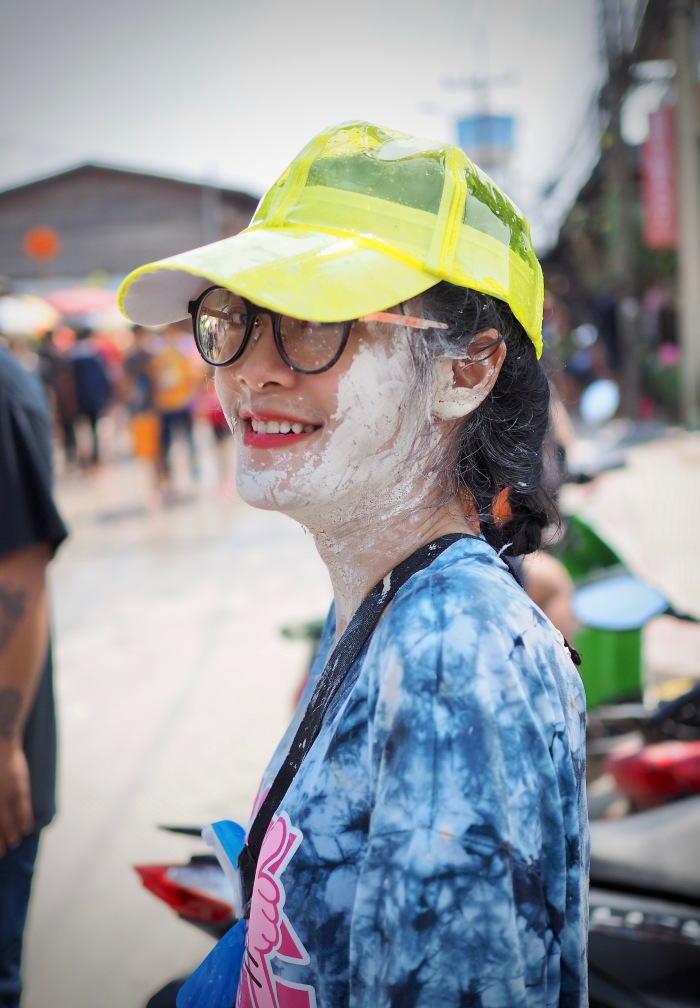 Early into my journey it became clear that the mass of people weaving slowly through the streets of Kanchanaburi would eventually pass my hostel so I buried my phone in my shirt pocket and just enjoyed the walk. Shortly after passing a stretch of bars and massage parlors the most deafening pair of speakers on the route thumped to life and behind them was the Wee Hostel, my hostel. A ‘Closed’ sign hung on the door but when I appeared outside with a backpack, shoulder bag, face covered in mud and dripping like an old faucet they opened the door and apologized for my wet welcome.

The woman who sent the email asked in broken English, “Did you put in plastic?” 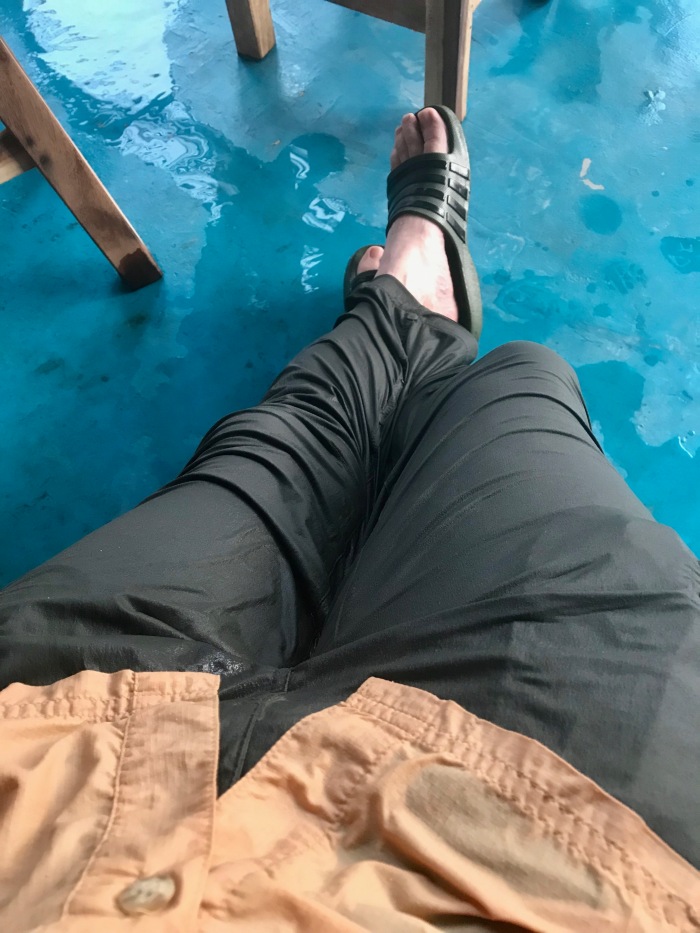