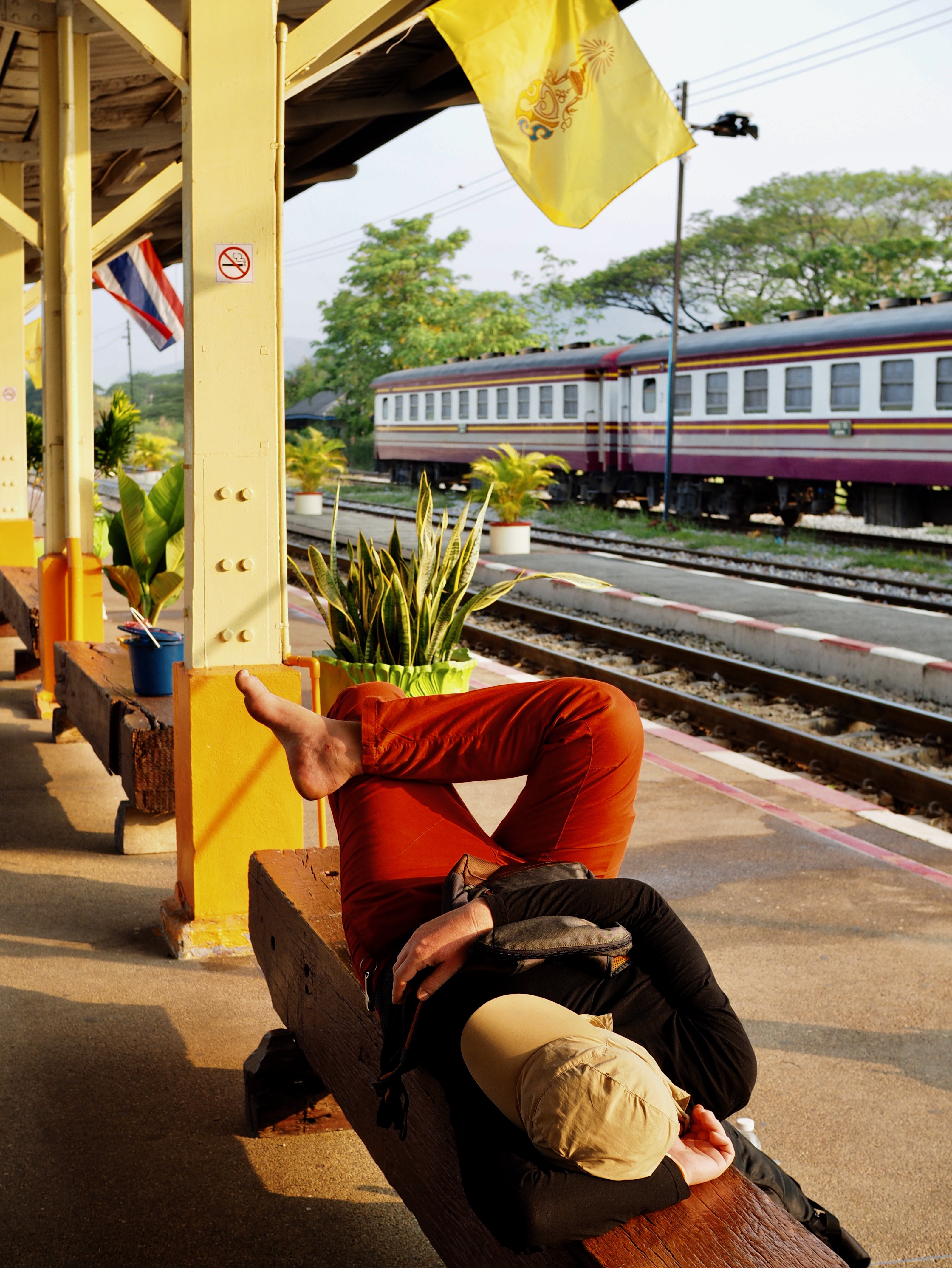 Serendipity is defined as, ‘the occurrence and development of events by chance in a happy or beneficial way’.

When I was sixteen I bicycled across America with a group from Taylor University led by Coach Bob Davenport. I had never heard the word “serendipity” before but Coach used it often. Most of our team were college guys and devout Christians. Others found Jesus along the way. In the evenings with help of a banjo and a couple guitars we sang hymns at local churches and between songs I listened to heartfelt testimonials, but despite the ripe environment I never found Jesus. I did discover serendipity though and I’ve been a believer ever since.

My month in Thailand was now down to three days and the guidebook urged me to take the train north to a museum but my heart wasn’t in it. I just wanted to go for a long walk and give serendipity a shot. 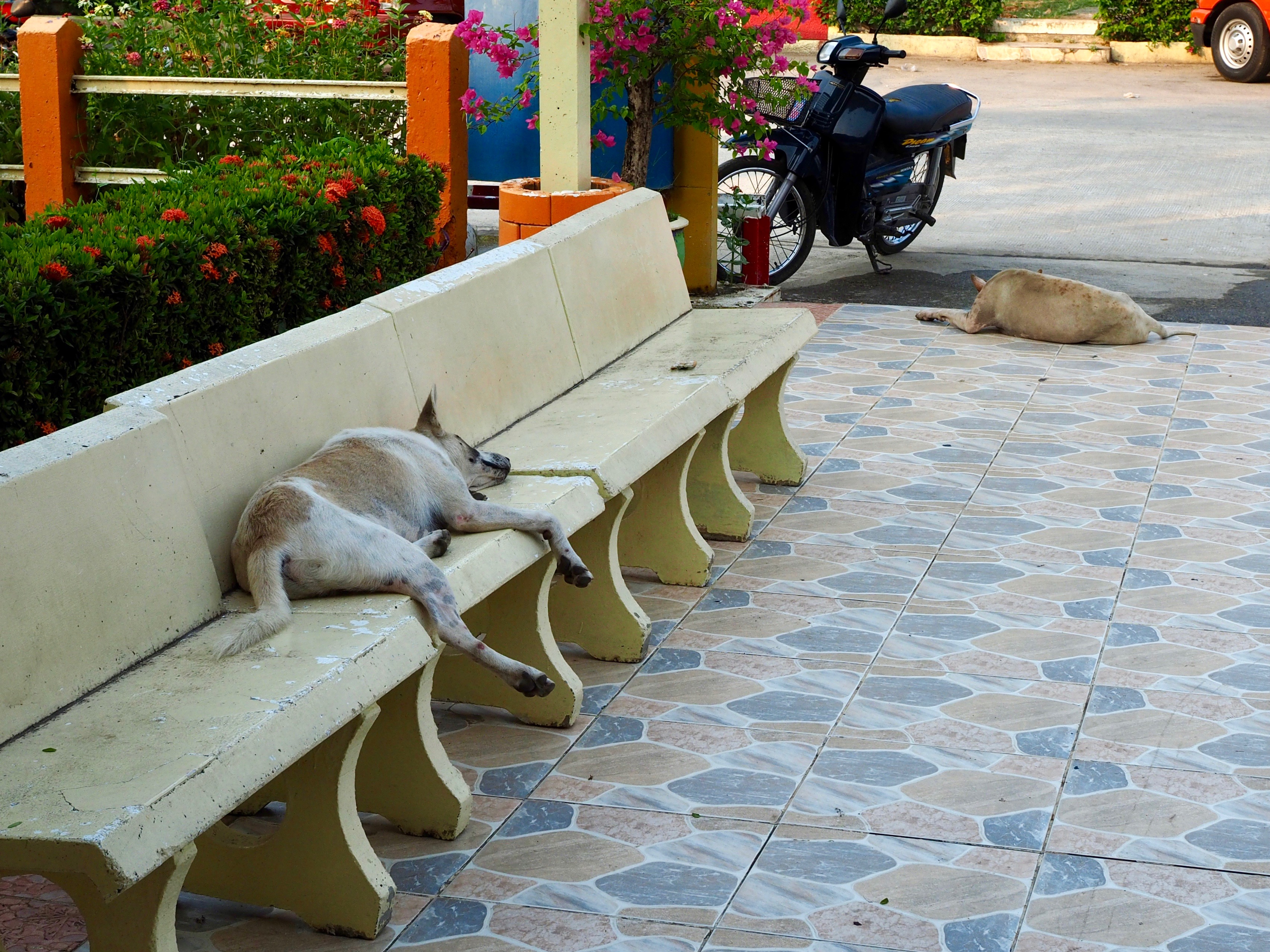 As I walked I couldn’t help but notice the dogs. With eyes shut, tongues hanging and chests heaving, they laid listless in the gutter barely out of reach of passing trucks. The juiciest pork chop couldn’t raise them from their heat induced stupor.  I stopped at a music shop to see what instruments the locals played and bought a set of finger picks. Then I ducked into a phone store in search of SD cards for my camera and struck out. But mostly I just wandered in and out of stores curious to see what the locals bought and in what country those products were made. Like America most things were made in China.

By midday the heat had stripped the sidewalks of life. Gardeners in handwoven hats that resembled large lampshades were the only people I passed. Despite the oppressive heat they continued to mow the cemetery lawn and trim its hedges, assuring the fallen soldiers a squared-away resting place.

South of the cemetery was the ‘National Library’. It sounded like a worthwhile stop and a good place to hide from the heat. In Thailand many buildings, even my hostel, look solid and climate controlled from the street but when you enter you discover the side walls are perforated. The holes allow breezes to pass through but makes air conditioning impractical. At the hostel only the bunk room had four solid walls and air conditioning.

After passing through the library’s glass doors I turned to the man at the information window and he assured me I could continue up the stairs and wander as I pleased. The upper floors were essentially large balconies that overlooked a central courtyard. Book shelves were tucked into the deep overhangs as were card catalogs with their miniature drawers and curved silver pulls. They reminded me of the ones I thumbed through as a kid in Indiana.

On each level there was a room or two fully enclosed in glass and cooled by air conditioning augmented with large floor fans. I slipped into one devoted to Thai culture. None of the books were in English so with an air of purpose I thoughtfully turned the pages hoping to stumble upon a photograph or sketch.

A few pages into the third book a middle aged woman with welcoming brown eyes offered assistance. As we spoke the enthusiasm for her country bubbled forth. She showed me pictures of local tourist sites and images of the king, often with a camera hanging from his shoulder. He was an avid photographer. Her name was Nina and she bounced from stack to stack like a caffeinated squirrel. When she wasn’t grabbing books to illustrate her country’s history she was pulling maps to clarify locations. I wish I had met Nina on my first day in Thailand. Repeatedly she apologized for her poor English but there was no reason to, her English was fine. Our visit could have continued longer but I was ready to grab a coffee and do some journaling so I kept walking.

The coffee shop was small, four tables and a short counter. At one table the owner sat texting, at another her six year old daughter sat with a pile of books, crayons and a tablet. I took a seat at the counter and looked out at the endless ribbon of motorcycles. Unlike America where motorcycles are massive and rumble like thunder, Thai motorcycles are petite with a tenth of the horsepower and humbly putt-putt along often with 3 people on board. And keeping with the paucity of power, top speeds are reasonable and squealing tires from any type of vehicle are rare.

After a few sips of iced latte a women’s voice asked, “Where are you from?”

Cocking my head toward the sound I noticed bare brown shoulders against a thin white top that started half way down her cleavage and ended an inch or two above a feminine belly button. An intricate flower tattoo sprouted from her right shoulder and another all black tattoo resembling flames lapped up her shoulder blade. Further south faded denim cutoffs wrapped around shapely hips. The shorts were scant. The frayed hems were cut so high the white front pockets poked out from below and rested deliciously against her cinnamon brown thighs. It was a hot day in Kanchanaburi and Kalaya was dressed for it.